About the founders, trustees, Teachers and Lifeguards of likkle swimmers

I am a 28 year old childcare enthusiast, from a rural village in Kent, with high ambitions to help and support children achieve their full potential.  I've always been a keen swimmer and I am really excited to have set up Likkle Swimmers, which has such potential for the children in the Treasure Beach community. The changes I've already seen are so rewarding and I can't wait to carry on working within this amazing community. In my spare time, I really enjoy going swimming, taking part in yoga, cooking or travelling the world!

I am also a graduate, achieveing a degree in Healthcare Play Specialism, currently working at an amazing childrens hospital helping to support children through their kidney transplants and hospital admissions. I am DBS checked and also hold a peadiatric first aid qualification. 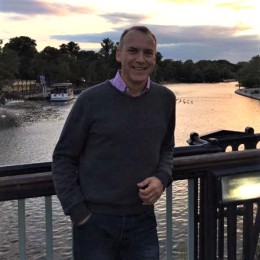 Psst! (My best Patois for hey there!!)

Having spent 17 years in the City, 6 years looking after my own business and 14 years in a large private family orientated UK company, I'm proud to be associated with Likkle Swimmers. Being passionate about sport and the qualities & skills it brings to the development of young people, I look forward to supporting the structure and finance arrangements of Likkle Swimmers.....I'll be volunteering as well!!

From our story comes our mission; we aim to reduce the incidence of drowning by providing swimming lessons and basic water safety techniques that could help save their lives and those of others. Who knows where this journey will end but our challenge is to make this basic life skill accessible to all primary school children in Jamaica...but we need to start somewhere; so help us in growing and keeping  the story alive. Tanks (thank you) 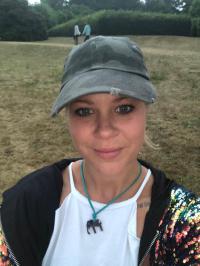 In 2002 I completed a level 3 diploma in nursery nursing and then went onto completing a CIBTAC diploma in Beauty Therapy and Make Up. Whilst I studied, I nannied with various families and had the experience of travelling with one. Once qualified I worked in the beauty industry for three years and volunteered for the charity 'look good feel better' for women with cancer. I thouroughly enjoyed my Nannying jobs and helping people in need through my beauty work.

In 2006 I had the greatest opportunity given to me to work in the orphanges, hopsitals and childrens hospice in Romania for 3 months. This was one of the best experinces of my life. When I returned, I found a job on my doorstep in Kent, at a childrens home for abused and traumatised children. I work for the charity Childhood First and have done for 10 years helping to inspire Young lives, and working my way up the ladder to deputy team leader and then Clinical Educational Support Assistant. Whilst working here I have become a mummy of 2 and have qualified in hypnotherapy and advanced counselling skills, a level 4 in children and education in the workforce. I am also currently completing a level 5 in UKCP Child Psychotherapeutic counsellor and a level 6 in supervision training.

I am very excited to be part of the team at Likkle Swimmers and helping however I can to help these little ones achieve their goals and stay safe. 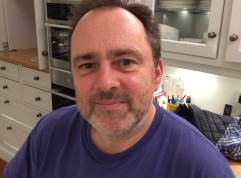 Rob
I was born and bred in Bristol and went to university in Oxford, where I did a degree in English and then three years of a PhD - before realising that I didn't actually want to be an academic.   I played in various indie pop bands, which is how I met my wife, Amelia.  The two of us still perform together, occasionally.
After escaping academia, I worked in TV drama, initially as a script editor on shows like The Bill and Inspector Morse. Later, I started my own company, Touchpaper TV.
I have two daughters (Dora and Ivy).  We moved to Kent in 2014, and thanks to Dora and Ivy's primary school, met everyone else involved in Likkle Swimmers.  I love the idea of this charity, and the fact that it will make such a difference to the lives of so many children.

I’m Camilla and currently live in Kent. I trained as a swimming teacher in 2001 after being a lifeguard and nanny for 4 years.
Since then I have taught swimming in several leisure centres and I set up my own swim school in 2011, the same time I was expecting my first child. I now have two children and am a Tutor for the STA in lifesaving, first aid, aquatics and mermaiding (!)
I was lucky enough to see the fab work going on in Jamaica in 2017 when I travelled with Charlotte to Treasure beach and have been a keen supporter of the charity ever since. 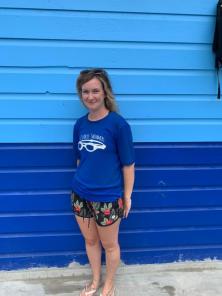 My name is Beccy. I'm a primary school teacher by trade. I live and work in Hackney in London.

I first met Charlotte in 2011 when we were both studying at university in Bristol. Since then we have become great friends and I was very excited to hear about the wonderful charity she was setting up.

I first visited Treasure Beach in August 2017 during the first year Likkle Swimmers ran. I fell in love in the place and the people instantly.

I am really excited to be going back this year as a swimming teacher! 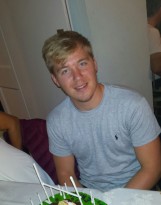 My name is Ewan Kimsey, I am originally from West Wales however I currently am studying Ocean Exploration at Plymouth University. When I first heard about Likkle Swimmers I thought it was a great idea, and was very keen to be a part of it. It is a great opportunity to help children learn a very valuable life lesson; swimming ,which is so important considering where they live. In my free time I enjoy participating in numerous activities such as swimming and mountain biking and I am a keen rugby player and fan. I am extremely excited and proud to be affiliated with such a worthwhile charity and can’t wait to see where it takes us.

Junior started the program with Charlotte as a lifeguard in 2017 and showed a massive interest and passion in swim teaching. He was the person that made her realise that they should train up the locals as swim teachers. The hard work and time he put in was inspiing and the reason it has grown in this direction is with his support.

Freddy- "My birth name is Anfernee Stewart, but most people know me as Freddy. I'm 20 years of age. I was born and raised in Treasure Beach, my favourite sport is football but swimming has also been apart of my life from when i was a little boy until now. One of my best memories of swimming was when my team was placed first in the Jakes Kiddies Triathlon, while swimming in that race was one of the best feelings ever, just being able to move all your muscles at once is truly astonishing. Now in todays life most litle kids are afraid of the water to swim, thats why i tuly admire what the Likkle Swimmers club is doing, they help those kids to conquer the fear whilst having fun at the same time. It would be my honor as a swimming teacher to help with the kids of the Likkle Swimmers program."

Charlotte- "Freddy has been incredible over the last couple of years, showing huge passion and always has lots of new ideas. He is particularly good with our highest level swimmers and our babies. Freddy has built some really strong friendhsips with the children and they adores him. We are so happy to have him as part of the team and hope he will stay with us for a long time.

Javin- "Hello! My name is Javin Ritchie. I am a 21 year old lifeguard who is about to be a swiming teacher for Likkle Swimmers.

I like being around kids and see kids have fun and grow which I've notice Likkle Swimmers have been helping with. I love what the Likkle Swimmers program is all about becuase it helps our younger generation so that they'll be able to help themselves and others if out in the position. I'm proud to be a part of Likkle Swimmers and helping our kids grow."

Charlotte- "Here we have Javin, another of our incredible teachers! Javin has been really confident from the start, and is always very gentle with our new beginners and Stage 1's, they love him! Javin also helps with finances when we aren't in the country, as he is training as a secondary maths teacher. We are so gratefu for Javin and all of the hard work that he puts in, we can rely on him for anything!" 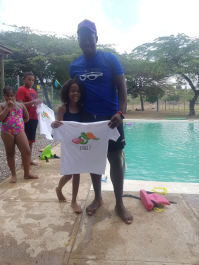 Sanjay actually found me on Facebook and wrote me a beautiful messaging explaining why he would want to work with us. His passion for helping children learn to swim really shone through, and ever since he joined the team he has been a delight! Sanjay has a lovely calm manner with the children. Sanjay also works at Jakes as a chef, so is multi talented! 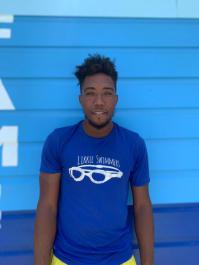 Janooi- "My name is Janoi Elliott and I am a 22year old certified lifeguard who is also a swimming teacher for the likkle swimmers.

I have a passion for helping kids and the likkle swimmers has been assisting me with my love for kids. They have been fulfilling my passion."

Charlotte- "Janoi is a valued member of our team. He is always so willing to work, and has such a kind, gentle, calm and friendly personality.  He will always offer to help with whatever we need, and nothing is ever a problem. Janoi started off as a very shy teacher, but has gained so much confidence!" 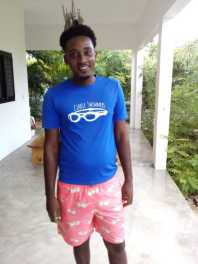 Shadane- "My name is Shadane Gordon, I was born and raised in Billys Bay. In my spare time I enjoy spear fishing and also i'm a part of the Likkle Swimmers group. It's an honor to teach kids to swim and I enjoy being around them because they are fun to be around so Charlotte I am grateful to be on your team."

Charlotte- "Shadane worked with us for our second year, and missed out on our first teacher training sessions, but has been quick to learn everything! Shadane is always having a laugh with the children, but is also a gentle giant! He is really good with the older children, and does additional lifeguarding at the pool at the weekends with Javin." 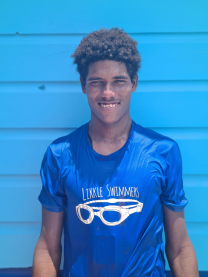 Connie (Lifeguard and Teacher in 2018)

Connie is our teacher with the most energy! Always laughing and always the loudest, the children love watching him in the water. Connie is excellent with our smallest swimmers at playing games, and making everything lots of fun. 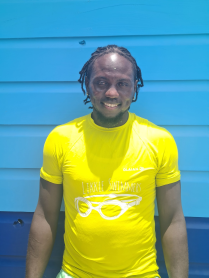 Dajay (Lifeguard and Teacher in 2018)

Our last teacher to introduce is Dajay! Dajay has grown in confidence so much as a teacher since he started. He is really good at 1 to 1 teaching if a student needs a little extra support with learning a stroke. 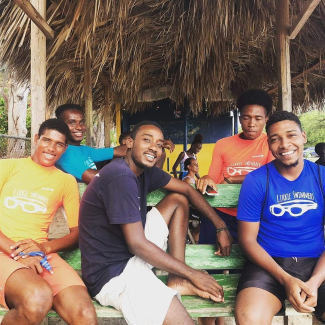 We were really lucky to have other lifeguards who have helped us out in the past when we needed it! Troy has always been gentle and kind with the children, AJ has great realtionships and is lots of fun, and Sandy is very knowledgeable about anything to do with lifeguarding!